At about 04:30 on 25 September I was running along this stretch of the Pacific Highway when suddenly I found myself face down on the road, hitting the left side of my head and scraping knees and knuckles. I was only aware of the fall at the instant my head hit the ground as I heard my glasses go skidding across the road.


I was hurt and bleeding, but not badly, so I picked myself up and kept running. It was only after I had run a further couple of kilometres that the realisation came to me that I had no awareness of what made me fall; no memory of a trip, or any sense of confusion or disorientation. I wondered whether I had experienced some sort of syncope. It turned out that both my GP and my rheumatologist were also somewhat concerned at the possibility that this was some sort of cardiac episode (exertional syncope). This is especially likely because one of my rheumatoid arthritis drugs, hydroxychloroquine, is known to cause a heart conduction abnormality - a prolonged electrocardiograph Q-T interval. This can be a harbinger of sudden death, with 30% of people who have an episode of cardiac syncope dead within two years.

So I told my story to a cardiologist. He recorded my ECG and found the Q-T interval to be normal. He reckoned the incident didn't sound like a cardiac problem. Only a month later I proved him correct.

On Friday 20 November I was once again out on my usual night run. Suddenly - whack! The left side of my head hit the concrete very hard, in exactly the same location on the Pacific Highway as last time I fell. This time I had just the tiniest recollection of some sort of trip, but no attempt to catch myself from falling. Almost all of the body parts hurt in September were hurt again, but worse. My glasses were broken this time, and much of the left side of my face was numb. I don't know why I don't seem to have a chance to catch myself from falling, but it seems certain that there must be some sort of uneven surface on the Highway at that point on which my foot catches and trips me up.

My TickrX ECG-based heart rate monitor (red graph above) also shows that just before the fall my heart was running quite satisfactorily at 121 beats/minute. So the heart seems to be in the clear.

Unfortunately, I seemed to have cracked a couple of ribs. Further, after a weekend of no improvement to the numbness on my face, I saw my GP on Monday. He arranged a CT scan which showed a zygomaticomaxillary complex facture, with the broken zygomatic arch pushed out of place. That afternoon I was seeing the plastic surgery team at Royal North Shore Hospital Emergency Department, and a couple of days later was admitted for Dr Alice to do a Gillies Lift procedure, which pulled the zygomatic back to where it belonged. I am now back home with a black eye, a neat row of 5 staples where Alice inserted her instruments, and her orders to not chew anything for 6 weeks (due to the attachment of the powerful masseter chewing muscle to the broken zygomatic arch). The damage to the infra-orbital nerve (caused by the fracture of the base of the orbit) which is responsible for the numbness in my face could take 6 months or more to heal. 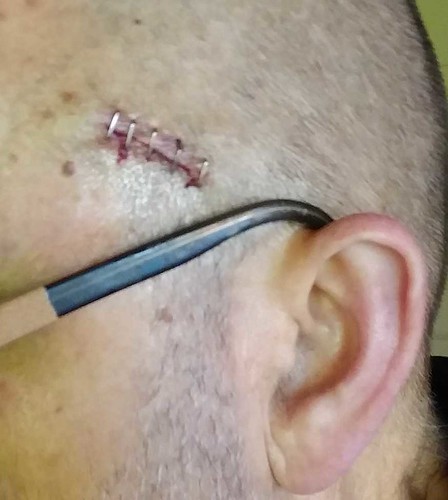