Not (yet) a quitter

Inspired by my daughter, daiskmeliadorn, I decided to set myself some goals. My first goal was to reach 60 kg body mass. It took longer than I originally planned, but I got there. My second goal was (is) to complete a half marathon - in any time - by the end of 2021. So I was perhaps being somewhat ambitious when I signed up for the Sydney Half Marathon to run on 18 May 2019. This was my result - definitely not the result I hoped for: 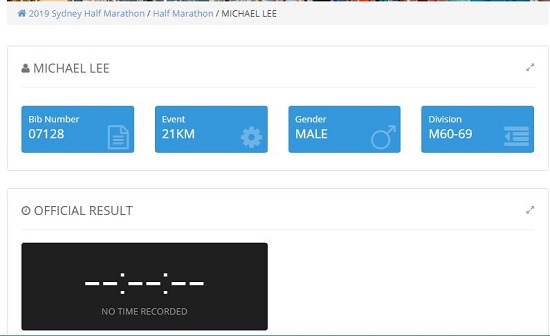 That is, a DNS (Did Not Start). Two weeks before the race I strained a hip muscle and it was too sore to run at all on 18 May, let alone run 21.1 km. My first response was to think it was silly to set such a goal. Surely I was too old and decaying to have any chance of reaching a goal like this. Indeed, would I only do myself unnecessary damage if a set a goal beyond my physical capacity? Not to mention the psychological damage of failing to reach a goal.

This morning I read a post by one of my daughter's friends, Raymond about how he had returned to track training after 10 months off. The day of his planned return to the track he was having second thoughts, and started making excuses for himself. But despite that reluctance he did his track workout - and felt elated afterwards! I remember that feeling!! I am also encouraged by my daughter's persistence and commitment. She did run a half marathon (in New York) around the same time I should have been running the Sydney Half. Her time was great, although wasn't quite as fast as she would have liked, but she didn't dwell on that, and focused instead on the positives. So I'm inspired by daiskmeliadorn, Raymond, and 'real' runners like Leah O'Connor,  I'm going to stick to my goal and I'm even publicly stating it. Of course, I might be dead by the end of 2021, or be too demented to remember that I had a goal. But right now I'm moving forward with a more positive frame of mind.