After a long period of recovery from a January 2016 vertebral fracture, followed by an August 2016 re-injury,  I started running again on 29 April 2018. I gradually ramped up the duration and intensity until I reached a point that last week I ran to work on four days, all in good time. I felt great!

On Friday I did feel a little soreness in my back as I ran across the Harbour Bridge, but it didn't last long. Later in the day it got worse, however. On Saturday (already one of the low days of the year, the date of J.S. Bach's death) I realised the thoracic spine pain was here to stay. It's present whenever I do anything significantly active - and running is out of the question. I presume I have crushed a vertebra, or exacerbated an existing, unhealed fracture. My vertebral bone density has improved over the last 12 months, but I am still in the osteoporotic range.

So this morning I walked (fairly slowly) about 5 km of the journey to work, and caught the NightRide bus the remainder of the distance. 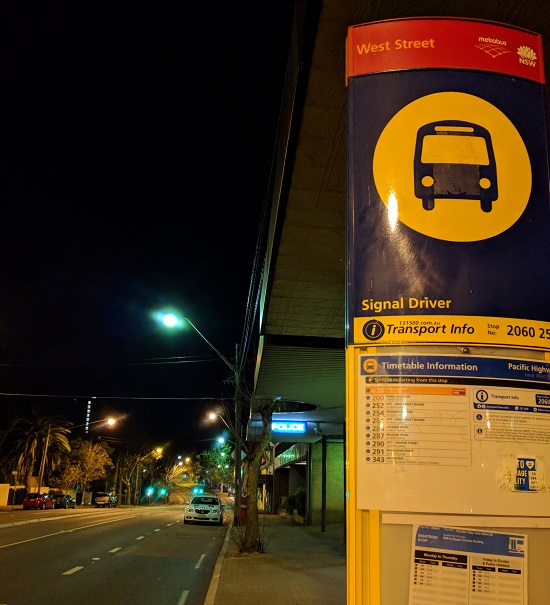 I think I'll be often standing at bus stops like this one, waiting for the NightRide bus, for quite some time into the foreseeable future. Since the beginning of 2016, every time I've started running again after a vertebral fracture I have had to stop again due to re-injury. I've recently started taking alendronate to try to improve my bone density, but the government says I should wait two years before my next DEXA scan to check on whether the medication is having the desired effect. I'd probably be foolish to try running again until there is good evidence (e.g. DEXA) that my bone mineral density is out of the the osteoporotic range, so it looks like running is off my agenda for two years, at least.

I'm not humming the Hallelujah chorus any more...I'm more likely to be singing the Bach chorale Es ist genug